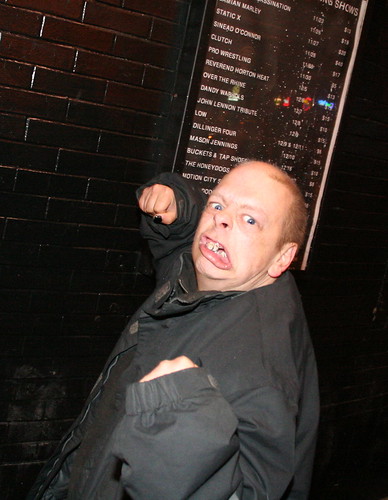 If you hit the Minneapolis and St. Paul clubs back in the 90’s then you probably met Hardcore Dave. Hardcore Dave was at every single live music performance. Every one. I know you think this is impossible, but it isn’t, because Hardcore Dave is a God. His official title is “Hardcore Dave, Rock God of the Twin Cities”.

Last time I saw Hardcore Dave was when SchaffDog and I were down at the Cabooze, where we had paid five bucks and sat through a god-awful band called The Billys who actually made a whole song out of the Juicy Fruit Gum jingle. A whole fucking song. With a guitar solo and everything. It sucked, but you guessed that already.

But we suffered through it to see a band we really liked, The Nixon Pupils. It was worth the wait. They previewed a song they had just made up, a kind of beat poetry piece called “The Spirit of a Saturday Night”. And for an encore, they invited Hardcore Dave on stage, and they played “Wild Thing” together, and the crowd went absolutely psychotic.

Hardcore Dave was at the top of his game back then. Everyone knew who he was, and those who didn’t, pretended that they did. I was pretty thick into the Minneapolis music scene in the 90’s and ran into Dave all the time, but I didn’t know any more about him than his name. I thought that maybe he was an industry exec or a talent scout, but he sure didn’t act like one. Turns out that he was simply a professional fan of live music like me.

On Sept 25, 1996, exactly Eleven Years Ago, this article came out. It gives you a glossy overview of Hardcore Dave, and what makes him tick.

It was exactly Eleven Years later that I ran into Hardcore Dave. Today. Sept 25, 2007. Eleven Years to the Day.

More correctly, I should say that Hardcore Dave ran into me. At, of all places, the gas station. I was wandering around in an uncaffinated haze, my mind functioning just enough to push my body towards the nearest source of caffeine. I was just thinking that was probably how it felt to be a zombie in Resident Evil: Extinction, (except replace ‘Caffeine’ with ‘Brains’) when I noticed someone talking near me. Talking towards me.

My eyes came into focus on a well-dressed man with no hair, but a large, familiar grin.

“Dave?” I asked, my hand half-extended in case I was wrong, “Hardcore Dave?”

It was. He didn’t look much different from how I remembered him.

Anyway, we got to talking and he said he recognized me right away. From eleven years ago, and of all the people he ever met (and never spoke to) *he* recognized *me*.

I told him the story of Jagged Spiral And The Very-Very-Nearly-Finished Recording “Days From Evil“. He made me promise to get him a copy of the album, and he asked if I could sign it.

Hardcore Dave asked me for my autograph.

What an awesome day…